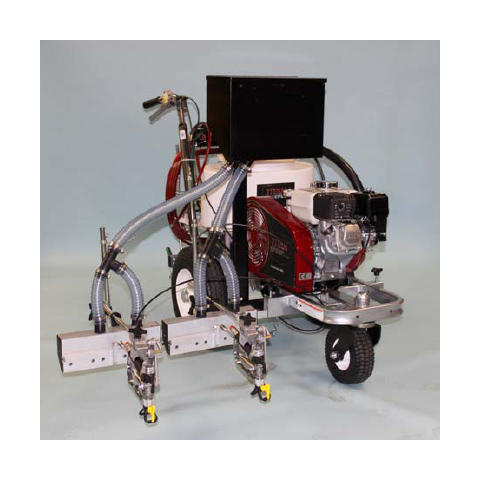 Multiple options to choose from:
Starting at: $799.00
View all configurations

Do you stripe lines for a living?  Do you apply glass beads to your lines?  If so, add the Titan glass bead dispenser and hopper kit to your PowrLiner line striper and have both paint and glass beads applied at the same time.

Titan offers two different dispenser versions for your line striper.  Choose between a 4" to 6" line width which is pretty standard for parking lot or street lines or you can get a 12" dispenser kit for crosswalk lines and runway line striping professionals.

All of the dispenser kits are gravity fed from a hopper that mounts to your PowrLiner and includes the dispenser box, hoses, hopper and mounting hardware.

Titan has several part numbers to choose from when it comes to despenser, but we'll walk through each one and help you choose the best part for your equipment.

If you don't have a kit, then you need to first decide if you're going to need a single gun or 2 gun dispenser.  If you're running the PowrLiner 3500 for example, you can only get the 1-Gun kit, so that's pretty easy but if you have the PL4955, PL6955 or PL8955 then you have the choice between a 1-gun and 2-gun kit.  If you end up going with the 1-gun kit, you can always buy the 2nd gun dispenser later and simply attach it to your hopper.  Pretty straight forward.

Now, let's get into the more confusing stuff: Purchasing the 4-6" dispenser vs 12" Dispenser

Moving onto the 12" dispensers is where it gets a little different.  There is only a 1-gun kit that includes a single dispenser and hopper.  If you need the second dispenser, you have to order the 2nd dispenser separately because there's no 12" 2-gun kit.  So if you're an airport runway striper and need two 12" glass bead dispensers, you will need to order both: 424-816 and 424-841 to get two 12" dispensers plus the hopper.

If you were wondering if you can mix-and-match the 6" box with the 12" box, the official answer is Yes, you can.  Let's say you want the 6" box for striping 4" parking lot lines and then you need the 12" for stop lines.  You can have both on one machine and dedicate one gun to 4" lines and the other gun to 12" lines.

If you decide you want to mix-and-match bead dispeners, pick up either the 12" 1-gun kit or the 4-6" 1-gun kit and add the respective standalone "2nd Gun Dispenser" to your cart as well.